AutoCAD LT Vs Full AutoCAD, which one will you choose?

AutoCAD LiTe or Full AutoCAD, and then should it be the Windows version or Apple MAC?

The type of work you do can help determine which AutoCAD is best for you, providing you know what the differences are and we have the low down, in a nutshell, right here. In this webinar video we show a feature matrix and also look at what's new in AutoCAD 2016.

There are some distinct differences between AutoCAD Lt and its big brother, AutoCAD. For many, the main thought is, 'oh, it's if you just want to do 2D or 3D, AutoCAD Lt is just for 2D and full AutoCAD is for 3D', but that is just the tip of the iceberg when exploring the differences. Full AutoCAD has many more advantages over its cut down version and this applies to both the Windows versions and the Apple MAC versions.

AutoCAD has been with us for longer than many of its users have even been alive!

Over 30 years, Autodesk introduced AutoCAD V1 in the winter of 1982 on the DOS operating system and has continually improved and enhanced this world leading CAD package to its current form, version 2016, the 30th major release.

Six years after AutoCAD's launch, Autodesk released AutoCAD for Mac with R10 (1988) and it wasn't until four years later that it came to MS Windows. So, yes AutoCAD was on the Apple MAC before Windows, but due to the decline in popularity of the Apple MAC in the late 1980s and early 90s, AutoCAD for MAC was discontinued in 1992.

Rolling forward 18 years to 2010 and a new, freshly developed version of AutoCAD for MAC was released and in this video, which concentrates on the dominant Windows version, we have the opportunity to take a brief look at the MAC version to offer you a more complete view of the different versions of AutoCAD available today.

To watch our AutoCAD Vs AutoCAD LT Webinar just click the image below! 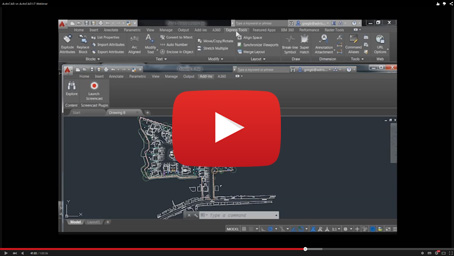 Why Do We Set AutoCAD Drawing Units?

Oops! How to correct an error in AutoCAD