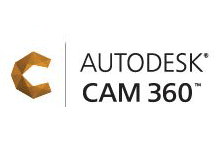 If you managed to catch the keynote speech at the Autodesk University last night you probably took away two main things. Firstly, Autodesks CTO and SVP, Jeff Kowalski is a brilliant and inspirational speaker, and secondly, robotic arms holding disco balls make for excellent dancers!

However, if you managed to see beyond the glitz you may have noticed a few announcements Autodesk made as well, such as the launch of CAM 360 – the first CAM solution in the cloud. And the first Autodesk cloud solution to provide tool paths, simulation and design all within one product.

Currently Autodesk offer several cloud based products, tailored towards the manufacturing market, including the likes of Autodesk PLM 360, Autodesk Sim 360 and the godfather of cloud-based design, Autodesk Fusion 360. Autodesk CAM 360 introduces the final piece of the puzzle – manufacturing itself – making the entire project lifecycle possible within a digital environment.

By tapping into the near infinite computing power of the cloud, CAM 360 allows users to take advantage of collaboration tools and shared data storage, and provides users with unparalleled ease-of-use and flexibility. CAM 360 also allows users to rapidly engage with co-workers and customers, and turn around the most demanding machining projects much faster than ever before.

What separates CAM 360 from standalone CAM tools, such as HSMWorks and HSMXpress, is its ability to take advantage of a digital prototyping platform based in the cloud, as well as its inclusion of the modelling tools found within Fusion 360, making it even easier to prep models for machining.

CAM 360 also includes the usual data management and collaboration toolkits we’ve come to expect from Autodesk, meaning you get real-time feedback and notifications through your A360 dashboard and of course you can access your design information anytime, anywhere.

This latest 360 offering is expected to be generally available at some point next year but for those as excited as me you can participate in the beta release now.

The Keynote speech contained lots of talking points so I’ll be sure to write a about it for those who missed it. In the meantime you can watch lots of talks via the live stream link here.

The New Generation Of Autodesk 360