Many people are familiar with the ability to apply an ‘Equal’ constraint to a multi-segmented dimension in Revit. (Determine the dimensions witness line location, select the ‘EQ’ symbol, look out for the elements as they move.)

Only one witness line of a multi segmented dimension can be an anchor, all the remaining witness lines will move relative to it. The easiest way to describe this feature is with a simple diagram. 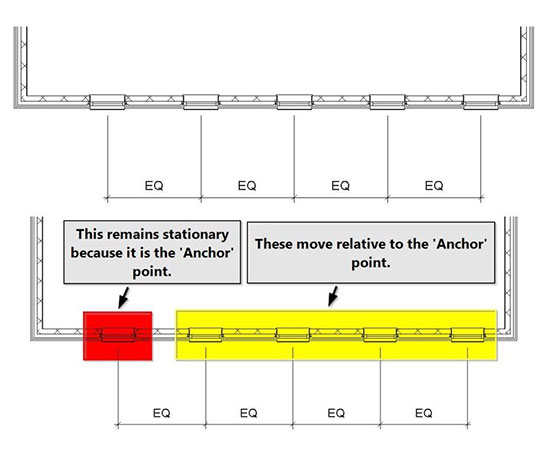 The image above shows a typical equally constrained, multi segmented dimension. The 4 yellow windows on the right will move to the red window on the left because it is the ‘Anchor’ as shown below.

So how can we determine which witness line is defined as the anchor? As so often with Revit, we are shown a symbol, in this case, surprise, an Anchor.

Select the equally constrained multi segment dimension, select an element which has a witness line adjoined, (shown green in the image above), move your cursor to displayed the ‘hidden’ dimension line and select it to display the anchor.

So how do I move the anchor?

Select the anchor symbol and drag it to another witness line.

In the image above, the anchor has been moved to the centre witness line, therefore the remaining windows move relative to the anchor.

To find out about 'Autodesk Revit's Equality Dimension Display Options' just keep an eye on our blog for my next post.

For a number of additional Revit tools such as 3D displacement view, arrange command, export to DWG and more, download Graitec's Advance PowerPack for Autodesk Revit. To find out more, just click the button below.

Tweet
Tags:
Revit tips
Getting more out of Revit MEP 3D Views
Creating a 3D section view of a level in Revit Str...

Why Use Revit "Stacked Walls"

Why PowerPack for Revit is the Perfect add-on for Architects, Structural Engineers & MEP Designers

Why do my air terminals not snap to the ceiling grid in Revit?

Where Is My Residential Template? Missing Content in Revit 2018