The start of 2018 has seen the Graitec Design and Vis team very busy with a number of different projects. One of those exciting projects was an animation for the building and positive impact of a flyover on a busy real-life city junction in East Africa by a company named Mabey, a leading international bridge and engineering specialist.

The brief was to produce an animation that depicted the junction as it currently is, causing problems with busy traffic jams, then to show the bridge being added in a build sequence and finally the flow of traffic after the flyover was in place.

Graitec were given an inventor model of the bridge, along with lots of still images of the area to use for reference for creating the scene, and information on the traffic flow. Mabey also gave us a .kmz file and map location for the junction and with this data the ground model and buildings could be generated using Autodesk Infraworks, giving us a perfectly accurate and to scale model of the area with all the terrain heights to take into 3dsmax.

With this base to work from, we could begin building up the area to produce a scene that resembles the real-life junction. Having plenty of reference images to work from made this part of the process a lot easier – see below for some examples of the images. 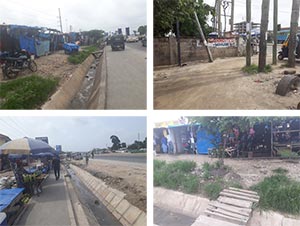 The project was on a tight schedule so an efficient workflow was paramount. In order to produce the market stalls that lined a corner of the junction we decided to create a few and use Rail Clone to then randomly generate them over a designated area, saving a great deal of time we would otherwise have spent on modelling each individual stall.

We also modelled up a ‘tuk tuk’ especially for the project due to not having anything similar available in our model library, and several other parts of the scene were modelled such as the small bridges over the ditch that can be seen above, telegraph poles, seller stands, rooves and sign posts.

Forest Pack was used to create the trees, grass and shrubbery, and civil view to generate the traffic. The first section of the animation where the junction needed to be depicted in its current busy state with all the traffic jammed meant that while civil view could be used to produce the vehicles, they all needed to be individually animated navigating the blocked junction.

This meant key framing every car which was a very time-consuming part of the project. The trickiest bit of this was keeping the vehicle wheels on the ground during their movement – the terrain was quite hilly with the junction itself undulating a fair bit so it was important to pay close attention to this whilst animating the cars. 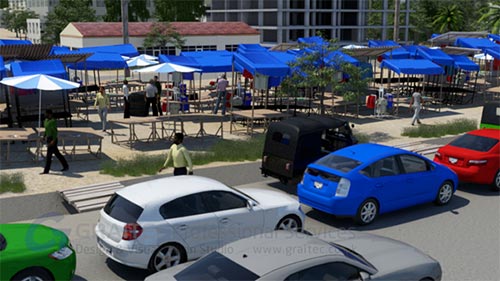 With the first ‘section’ of the animation complete and preview animations approved by Mabey we could then send this off to render whilst working on the bridge build sequence and final section with the flyover and new traffic flow in place.

Some adjustments are to be made to the roads on the junction themselves to accommodate the flyover which include widening them, so the 3D model needed to be adapted accordingly. We were able to use the roads that were included in the inventor model of the bridge for reference to adapt the existing roads once we brought the model into our 3Dsmax scene. The model was easy to split into sections which could then be animated in a ‘building’ sequence. Mabey provided us with information on the order of this animation sequence and we decided to use one continuous camera circling around the bridge as it was built. 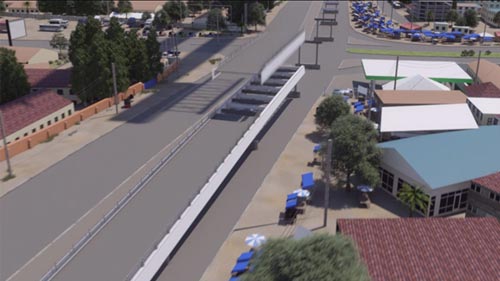 Inserting the now free-flowing traffic into the scene with the flyover added was a much more straight-forward process than creating the traffic jam. Civil view enables you to pick a ‘path’ to animate the vehicles along so it’s a simple case of drawing a line along the road, then picking the speed and positioning/number of vehicles you wish to generate – see below. 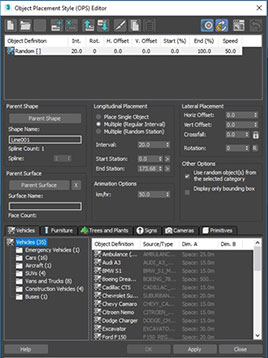 After all the 3D work had been completed and sent off to render after approval from Mabey, Adobe After Effects and Premiere Pro were used to put the shots and video together. Post production included adding effects like depth of field and colour correction to the shots. Sound was also added using a track from our music library and some traffic noises to complete the animation.

Some final still images and the finished animation can be viewed below: 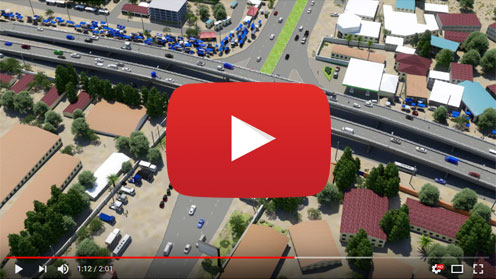 Graitec offer a number of CAD services including 3D animations, 3D visualisations and virtual reality. To find out more about these just head over to our Visualisation Services web page or click on the button below to request more information.

If John Snow had Infraworks