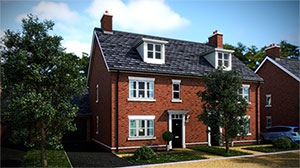 Here at Graitec we were tasked with creating an animation for Highwood homes. Highwood was founded over 30 years ago as a privately-owned company with a commitment to acquire land selectively, build sensitively and sustainably whilst setting benchmarked standards of design and construction.

The project in question was a new site in Eastleigh called North Stoneham Park, the site is set within a historic deer park and there will ultimately be apartments, houses, a community centre with a prestigious care home, new school, retail units, sports facilities and green open spaces.

The scope of the project was to take existing ArchiCAD 3d models of the buildings, add more detail to them, add all the surrounding area and landscaping then create a flythrough of the model. Another part of the scope was to create 360 panoramas of the site to be used as part of a pano-tour in the visitor centre and on Highwood’s website.

The first step was simplifying the model by turning off the layers of all the internal content of the buildings that we didn’t need. Then we had the job of converting the ArchiCAD model to an .obj which enabled us to import it into 3ds Max. This was quite time consuming due to the size of the model. Once the model was imported we started modelling all the roads from the CAD plan of the site. To do this we used a program called Autodesk Infraworks; AutoCAD, 3ds Max and Infraworks are all part of the AEC collection.

Once the roads were complete we moved onto all the grass areas, drive ways, paths and gardens. We also had to use software called rail clone to create fences and the forest pack plugin to create all the trees and foliage of which there is quite a lot due to the forest setting of the site. The most difficult aspects to create were the suds used for drainage that needed landscaping, and planting as well as grass areas.

Model as per ArchiCAD before detailing: 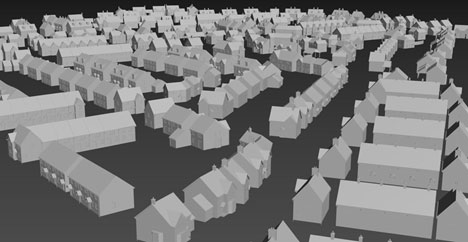 Model with all detail applied in 3ds Max: 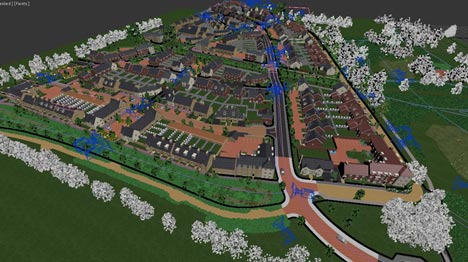 Highwood really pushed us to get the high level of detail required to bring the animation to life, and entice potential customers that may want to buy one of the properties being built.

We then set up all the animated camera paths through the site and the cameras for the 360 panoramas. Once the camera speeds and paths were agreed by the client we started the process of rendering. We always knew this would take some time due to the large amount of data.

An average project that we undertake here at Graitec may have 1 million polygons - this scene had 30 million and is the largest we have ever tried to render, this means lots of RAM is needed by the render nodes to handle the data. Nevertheless, we got it rendered on our internal render farm.

Graitec design vis studio created this pano-tour that has been embedded on Highwoods website.

Highwood also commissioned us to produce an image to be used on their website as an interactive map which incorporated the entire site. The design vis studio created the render of the housing estate and composited them into the existing map; then another of Highwoods partners added the interactive functionality. 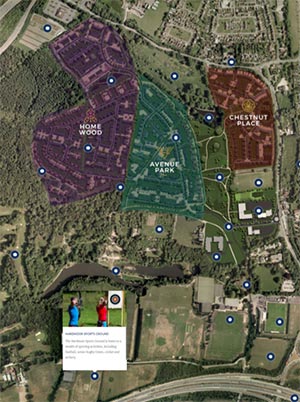 The last part of this job was post production where we assemble the thousands of files created by rendering. We render to image sequence so each individual frame is an image in. exr format. This job had around 8000 frames but that only included the main render pass, we also had to render zdepth for use with depth of field and ambient occlusion to gain extra shadow detail. We assembled all these files using After Effects where we can apply effect like colour correction, and Premier, both of which are in the Adobe creative suite.

Please take a look at the animation below: 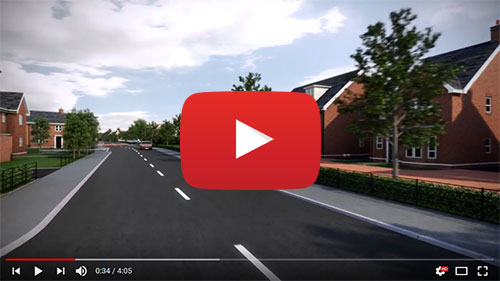 Graitec Design and Vis offer a number of services such as animations, interior/exterior visualisations, virtual reality, architectural walkthrough's and more. To find out about these just get in touch with Graitec today by clicking on the request more information button below.

A Guide to InfraWorks Smart Labelling