Here at Graitec our Design and Vis team offer expertise in producing high quality 3D visuals of product models, building interiors/exteriors and much more. But what is involved in getting a project from the stages of its conceptual design to creating a realistic image or animation of the finished product?

To begin, the team are usually handed either a 3D Revit or Inventor model, or a 2D design and specification from the client. If this is a product which requires specific modelling, such as a piece of mechanical equipment, our experienced technical team handle this part, modelling the product up in Inventor, for the design team to then bring it into 3ds Max to create the visuals. External visualisation projects often come to us in the form of Revit models, and we are experienced in transforming these models into detailed 3ds Max visualisations.

For internal visualisation projects, we are often given a 2D AutoCAD file, and for these types of projects we can take this CAD file straight into 3ds Max and build on top of the design so that the visuals are perfectly accurate and to scale. Below is an example of a CAD drawing for a gym, and an Inventor model of a product: 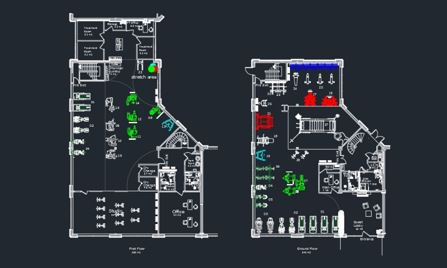 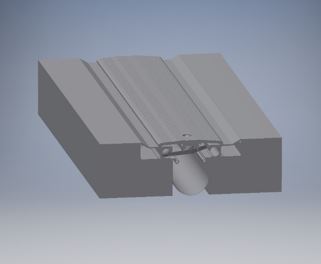 Once we have our model in 3ds Max, the next step is to get the materials into the model. Some ‘mapping’ is usually required, which means telling the computer how to scale and position the texture onto each specific part of the model.

After this the scene is lit – this is usually done using a combination of individual photometric lights positioned and set up to best light the scene, and an environment map, which is much like a studio as used in a real photoshoot, in order to project some lighting and reflections onto the model. Below you can see an example of one of the environments we use – this particular one works best for lighting up singular product models.

Next a camera or multiple cameras are positioned in the scene so that we can set up the angle from which the final image will be produced (either a still camera or an animated one depending on whether the client requires a still image or a walkthrough). The two images below are screenshots of what we see working inside 3ds Max with a gym for example; in the first image you can see a top down view of the entire scene, and the second is the view seen through the camera circled in red in the first image - this view is the visual we want the computer to produce. 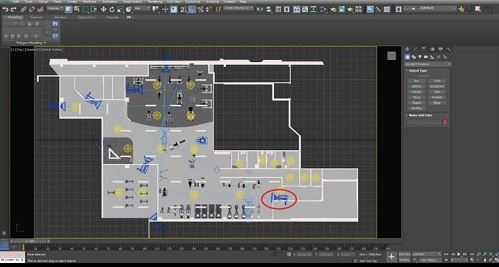 When all of this is set up we then need to render. Rendering is the process in which 3ds Max gathers all the information from the lights, materials and environment to produce an image of the scene, and this is the part where we specify the size of the image and type of file we want to create. For stills, this would be a single image, and for animations an ‘image sequence’ which consists of 25 images or ‘frames’ per second of animation.

Rendering is the most time-consuming part of the project. The render time depends on the complexity of the model, but as an example, a single still of a gym interior usually takes 4-6 hours to render. A gym animation which would typically consist of 5 cameras with footage ranging from 6-12 seconds per camera can usually be rendered in under a week due to our in-house multiple machine rendering capability. We use the ‘NVIDIA Mental Ray’ renderer, which allows us to have separate layers for each image, including a shader layer, a layer for the depth of field and so on, which lets us control these elements separately in the post-production stage. 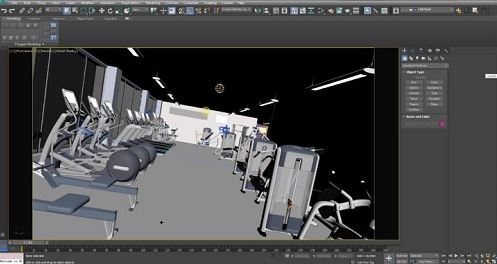 The rendered image and its components must then be taken into Adobe After Effects and polished up before handing it to the client. This is where we make any adjustments to the image like brightness/contrast, as well as adding effects such as lens flare and glow. Whilst experience means our team knows which effects and settings work best for various sorts of visuals, there is no set formula to this part of the process, and each image is painstakingly edited to produce the best possible final resultl for the client.

For stills, we hand the rendered image over to the client, and for animations the separate camera shots are then taken into Adobe Premiere where they can be put together, and any music, sound effects or titles can be added.

Check out some of the other great projects we have been engaged on here at Graitec Design and Vis, and for more info send us a message directly:

Tweet
Tags:
3ds Max
Why do we need to export Inventor DWG to AutoCAD D...
Using the ReConstruct tool in the iConstruct Navis...