Over the past few years, Autodesk have been a very active contributor to the open source Dynamo project. The software provides a visual programming environment for designers, allowing them to visually create logic that determines the geometry and performance of Revit elements and data.

And like Autodesk software/projects Dynamo has a new version. 0.7.1 officially replaces version 0.6.3 as the most recent stable build.

For anyone who hasn't encountered Dynamo then now is the time to as the software extends Building Information Modelling with the data and logic environment of a graphical algorithm editor.

Yes I know that didn't really tell you why you should use Dynamo but ultimately the graphical programme allows you to:

Overall with Dynamo you will be able to create custom visual codes to efficiently automate many design tasks.

As the tool moves from 0.6 to 0.7 it exemplifies an important refactoring of the original code base meaning that the new software allows for better performance, more robust geometry, superior interactions between traditional scripting and visual programming and the loading of external software libraries.

Although this sounds confusing it can be used by both non-programmers and programmers alike so don't panic if you don't know code you can still use the tool with ease.

What's brilliant about the new Dynamo is that not only does it run as a standalone product but is also compatible with Revit 2014 and Revit 2015. This allows you to manipulate your existing data within the Autodesk software. 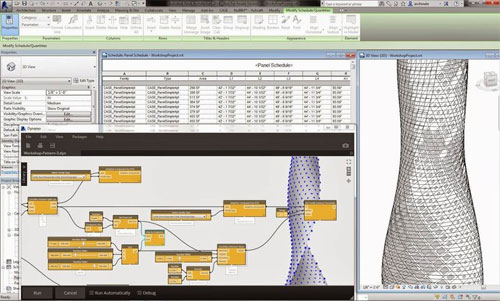 If Dynamo sounds like a tool that you want to utilise within your projects then it can be downloaded and easily integrated into Revit here.

As Dynamo develops you have the power to contribute to what you would like to see in the next version so make sure you give your feedback.

To discuss your Autodesk Revit software needs or Revit families requirements contact us on 023 8086 8947 or request more information.