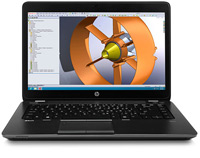 HP has expanded their Z family portfolio to include the world’s first Workstation Ultrabook in the form of the Zbook 14.

As part of the expansion, HP has opted to integrate Intel’s new Thunderbolt technology for high-speed data transfer, making them the first line of workstations to adopt it.

The HP Zbook 14 is designed for the professional who needs a workstation to run high quality applications and also requires the mobility of the modern world. It’s delivered through a brand new industrial design and is very thin and light, weighing in at only 3.6 pounds and measuring 13.35 x 9.33 x 0.83 inches.

It looks the part as well. For those likely to use the workstation for CAD applications (you’re our type of people by the way) the design may seem a bit more familiar, but for those working in photography or video fields, visually it rivals the traditional MacBook by a country mile.

The main selling point for me is the ease of reaching the insides of the laptop. The bottom pops off like an old Nokia 5110 mobile (which is a good thing) giving you access to the main components there and then.

When you remove the laptop base what you end up with is an extremely user friendly chassis, meaning even the average Joe could implement upgrades through a tool-less environment. This includes two DIMM slots (up to 16GB of DDR3 RAM), mini SSD (up to 120GB), 2.5-inch drives (up to 1TB, 7,200 rpm HDD, 500GB SATA SSD), and a 3-cell battery. 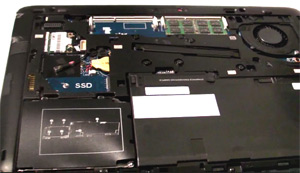 Beyond that the Zbook 14 comes with Intel’s 4th-generation Core i5 or i7 chips and the AMD FirePro M4100 GPU with 1GB of GDDR5 RAM, graphics card.

The Zbook 14 also comes with all the usual ports, including 4 x 3.0 USB ports, a combined headphone/microphone jack and a finger print reader for security purposes.

As well as the Zbook 14, the world’s first Workstation Ultrabook, HP has also released 2 more Zbook Mobile Workstations to further enhance their Z range portfolio. Both the Zbook 15 and 17 feature a Thunderbolt port, as well as an optional Dream Colour Display Panel, offering calibrated colour reproduction for graphics professionals.

From a display perspective there are lots of different options, including HD, HD plus, HD plus touch and FHD, which is an ultra-wide viewing angle. It supports lots of resolutions, ranging from 1366x768 to 1920x1080, providing solutions to a variety of needs.

The HP Zbook 14 Ultrabook is planned to be available in late October and rumoured to start at about £1,107. The Zbook Mobile Workstations, both 15 & 17, are available now and are priced at £1,502 upwards.

For more information regarding HP Workstations, both desktop and mobile, call us on 023 8086 8947