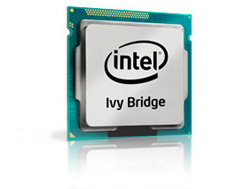 Intel have now announced their latest and greatest processor range called Ivy Bridge, and this time it's gone 3D.

Unlike the mobile phone which once shrunk to such a dimiunative size that it became almost unusable before "growing up" again to meet the demands of smart phone technology, computer processors just keep on shrinking, but at the same time are becoming more powerful (and less power hungry).

There was a mindest that Gordon Moore's prediction about the growth regarding the possible number of transistors it would be able to fit on a board was reaching it's maturity, but research and technology has a wonderful way of proving the pundits to be wrong.

The Intel answer is to go 3D with a brand new transistor design that will see them shrink processors even further going forward.

For information can be found here