The Graitec Design and Visualisation Show-reel is a great way of showcasing the design team’s skills, and provides an easy way for potential clients to get an idea of the different services available, and the results they can expect. The last show-reel was put together two years ago and so recently the team decided it was time for a newer up-to-date version to be made.

The key goal of the show-reel is to portray the entire range of services the Graitec Design and Visualisation department offer and so it was important to include a little of everything; 2D and 3D animations and stills, mechanical models, architectural design and more – not to forget Virtual Reality, a sector which Graitec has recently moved into.

Adobe Premiere Pro was used to put the show-reel together, and the first task was to gather together all the video clips and stills to be used. With our archives full to bursting, it was a case of picking and choosing the visuals and animations that best showcased our work, selecting mostly work from the last couple of years, although a couple of older clips from particularly interesting projects were also included.

It was important to make the show-reel new and fresh, and to make it stand out from the many others that one may encounter when searching YouTube for visualisation services, therefore simply piecing together some clips and adding a soundtrack wouldn’t suffice. Instead the team decided to pepper the show-reel with information about the studio’s services in a sort of animated ‘user interface’ style, as often seen in futuristic sci-fi films – and with the company striding out into the realm of VR which is undoubtedly the future of visualisation, this style seemed to fit our up-to-date Design and Visualisation department perfectly.

Firstly, the team wanted to make the opening sequence grab the viewers’ attention and invite more intrigue than simply launching straight into a clip sequence. Some elements from the previous show-reel were used; the Graitec logo appearing with a light shining through the letters provides a nice link between the two and goes well with the soundtrack chosen, which begins with a sound effect to perfectly match the timing of the light. Starting with the previously mentioned ‘user interface’ design theme that would follow the show-reel through, information, shapes and logos were added to animate onto this title image. This, along with subsequent clip sequences was produced in Adobe After Effects.

The next sequence to be made was the one to follow the title. As shown on the left, this sequence included a rotating wheel, and was created using a variety of layers and effects. The dancing lines around the edge of the wheel were generated using audio to produce soundwave images, while the flickering light panels and rotating lines were shapes with polar co-ordinates added along with other effects, and the whole thing programmed to rotate. Animation clips were added to the wheel while more timed to appear from the middle as brief teasers for what was to come, and the whole sequence was finished off by adding flashes of light which were generated with an optical lens flare plugin.

Once the show-reel launched into clips, the style introduced in the beginning was continued throughout. It was found to be a useful tool in introducing what certain clips were of (for example: interior visualisation) and information about the services provided by Graitec were also able to be included in the show-reel without this hindering the showcasing of work.

Examples of this can be seen in the two images below; all of this information was animated both in and out while shapes spun and lines danced, to give it that technical/computer-like feel.

To keep the viewers’ attention, sequences similar to the first were added in a couple of places throughout the show-reel, in between clip compilations. This time, instead of animations on the rotating wheel, information about the services the Graitec Design and Visualisation team offer were spinning around, and this wheel was later used to introduce the Virtual Reality section of the show-reel. 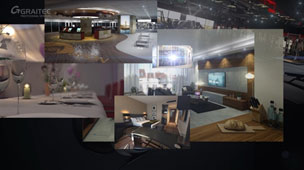 Firstly though, in the middle of the show-reel the team decided to add a sequence which showcased some of the stills that have been produced; not all clients who use the design team’s services require animations, instead opting for renders of single high-res images, and with thousands of these on archive it seemed a shame not to include some in the show-reel. To make these stills jump out, they were made into an attention-grabbing sequence, again using Adobe After Effects, resulting in them appearing with flashes of light timed to the music, and growing as they fade out to make way for the next.

The important part to be included in this new show-reel was, as mentioned, Virtual Reality. This provided the team with a challenge as it is somewhat difficult to show VR without actually putting on a headset and getting the VR experience. A few different ideas were experimented with including rendering out a short clip of what is seen inside the headset while actually using the equipment, but the render quality of this is poorer than the extremely HQ renders produced in our animations, and a full screen scene placed in the middle of these animations simply looked like a poor quality render with nothing to indicate that it was through the VR headset. 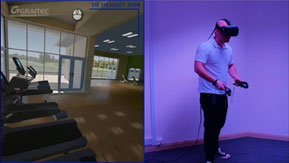 What was finally decided on was filming somebody using the VR equipment whilst recording what is seen inside the headset, and placing both these clips together side by side on the screen. Once smaller, the render of the VR scene looked better, and by showing somebody actually using it, this gave a much clearer idea of what VR is. Some footage was also taken of the VR headset itself from a first person point of view, so that the viewer may feel as though they have put on a VR headset and been taken into the world of virtual reality.

After some more clips, the ending sequence needed to tie together the whole show-reel and provide a nice finish. Animations were timed to appear on the screen with the music in flashes of light, much like the still sequence, and once the screen was full of these clips, the wheel as seen previously throughout the show-reel was then brought in to appear over the top of this scene, generating a nice shot to end with which summarised the work the Graitec design team can produce, and presented a reminder of the services we provide.

To watch the Graitec 2017 Showreel just click on the play button/image at the beginning of the blog.

If you want to find out more about Graitec's 3D animation and 3D visualisation services, just contact the design and vis team on 023 8066 1616 or click the button below to request more information.